Not what you want?

Try other similar-meaning words, fewer words, or just one word.

Enter your email below, and get an automatic notice when results for Endurance are added or updated...

Personalize your custom “Endurance” project by clicking the button next to your favorite “Endurance” title below...

持久 means "to endure" or "lasting".

In some context, it can mean "persistent" or "persistence" (especially in Japanese and Korean).

耐力 means stamina or endurance. However, depending on context, it can also mean patience or tolerance.

耐力 is the first part of titles like "endurance swimming".

The first character means, "to tolerate" or "to endure".

The second character is "power".

Together, you could say this word means, "the power to endure".

勤勉 can be translated as diligence, industrious, assiduity, assiduous, diligent, or sedulity.

Diligence is working hard and doing your absolute best. You take special care by doing things step by step. Diligence helps you to get things done with excellence and enthusiasm. Diligence leads to success.

See Also:  Hard Work | Tenacity | Commitment | Passion for a Cause

Patience is quiet hope and trust that things will turn out right. You wait without complaining. You are tolerant and accepting of difficulties and mistakes. You picture the end in the beginning and persevere to meet your goals.

忍耐 can also mean "to endure", "restrain oneself", "forbearance", and in some context it can mean "perseverance" or "endurance".

忍耐 is also used as a tenet of Taekwondo, Tang Soo Do, and other Korean martial arts where it's titled "Endurance" and romanized as "In Neh".

Note that when writing this as Kanji, Japanese will tend to write the first character in the form shown to the right. If you select our Japanese master calligrapher, please expect this Kanji form (yes, it’s just one stroke that is slightly different in location, crossing another stroke in the Japanese Kanji form).

The first character was first simplified in Japan. Later, that simplified version became the standard in mainland China. Just in case you want this version, it is offered here. I suggest it if you audience is Japanese. Most Chinese know the older traditional version which looks like 體力.

忍 contains the ideas of patience, equanimity, perseverance, forbearance, and endurance. Alone, this single character can be a bit ambiguous or flexible. It can also mean to endure, to bear, to put up with or to conceal. If you want to simply decide what this character means to you within the general meaning but keep it a mystery to others, this is a good choice.

If you want to be more direct, you may want to choose one of our other selections that mean perseverance or patience (you will see this character within those larger words/phrases).

There is a secondary meaning in Japanese, since this is the first character of the word ninja.

Note that when writing this as Kanji, Japanese will tend to write it in the form shown to the right. If you select our Japanese master calligrapher, please expect this Kanji form (yes, it's just one stroke that is slightly different in location, crossing another stroke in the Japanese Kanji form).

跆拳道精神禮義廉耻忍耐克己百折不屈 is General Choi's writing that is often called "The Tenets of Taekwon-do". 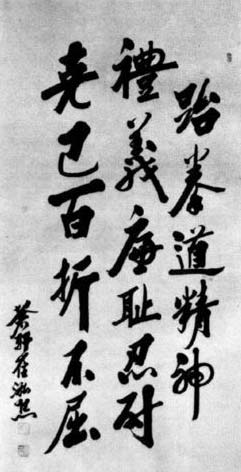 The actual title would be translated as, "Taekwondo Spirit" or "The Spirit of Taekwondo". It was originally written in Korean Hanja (Chinese characters used in Korea for about 1600 years).

General Choi's original calligraphy is shown to the right. Your custom calligraphy will be unique, and not an exact match, as each calligrapher has their own style.

In modern times, the common form of written Korean is Hangul (a phonetic character set). The table below shows the text in Hangul and Hanja along with a pronunciation guide and a brief English translation:

0 people have searched for Endurance in Chinese or Japanese in the past year.
Endurance was last searched for by someone else on Apr 1st, 2021